skip to main | skip to sidebar

She was a county prosecutor in Florida who refused to return Master Tank, a Katrina dog, to his family.

She was the LAWYER who lied, manipulated, and distorted facts even when presented with the truth/ evidence, causing Tank's family an extraordinary amount of time, expense and emotional energy to get their dogs back.

She was the self-proclaimed "dog lover" who ranted and raved that Tank's family didn't take care of him.....yet, in spite of all the time she had him, SHE NEVER HAD HIM NEUTERED.

She returned Master Tank INTACT to his family. Hmmm...did she plan to breed him or was she just "irresponsible" and a "bad dog owner?"

(see Tank's cojones in photo below) 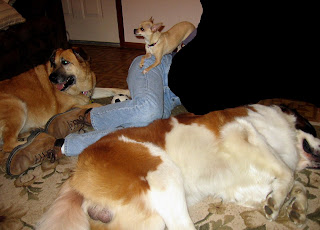 (photo of Nila, Sandy and Master Tank was taken the day Nila and Tank were reunited with their family)
She was the LAWYER who knew that the law was very clear about ownership of Master Tank (and all other Katrina dogs). She knew that he was the legal property of his Louisiana family who did not abandon him.

She knew that according to the LAW, pets are considered property and owners of lost or stolen property have three years to reclaim their property, by legal action if necessary.

She knew or should have known the law yet distorted the facts to her own self-serving ends.

Even after she returned Tank, she continued to lie, claiming that she was given "visitation" rights with Tank, and a year later, when she bought a St. Bernard puppy from a breeder in CA, she lied again by claiming that she had stayed in touch with the family in Louisiana.

She NEVER admitted to making a mistake or apologize to the family. Not even to the children.